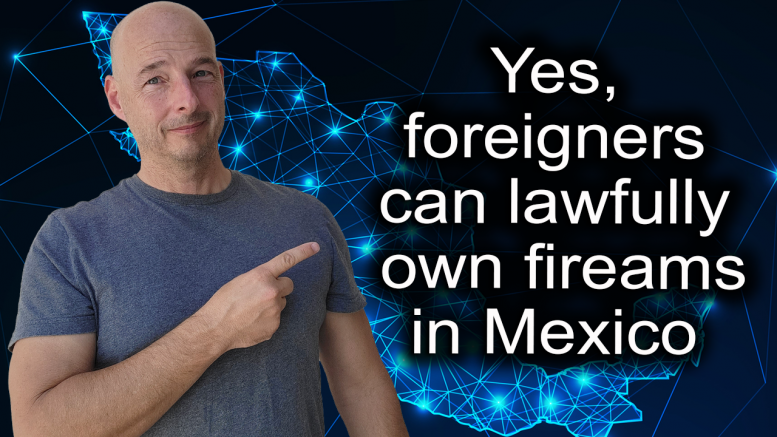 I get a lot of questions related to the gun laws in Mexico so I decided to do a post answering the most common ones.

Is it legal for civilians to possess firearms in Mexico?

Although Mexico’s gun laws are very strict in comparison with those of the United States, the right to bear arms — at least in one’s home — is rooted in Article 10 of the Mexican Constitution.

Are foreigners allowed to purchase and/or possess firearms?

Provided that the foreigner is a permanent legal resident (permanent resident card required) or has obtained their Mexican citizenship.

Tourists can obtain a permit to temporarily import a firearm into Mexico for sport purposes but only after receiving an invitation from a registered shooting or hunting club in Mexico.

La Secretaría de la Defensa Nacional, commonly referred to as la Sedena. All firearms must be registered in Mexico.

What are the requirements to buy a firearm?

In order to purchase a firearm or ammunition, you will have to complete a request with Sedena and get their approval. The following are a list of the requirements:

Where can I buy a firearm?

There is only one gun store in Mexico and it is government owned and operated. The store is located in Mexico City and it is called la Dirección de Comercialización de Armamento y Municiones (DCAM).

You will never see an advertisement for it and it is not well marked. Before going there, you’re going to have to complete all of the requirements in the preceding section and be approved.

You can see what they have in stock along with the corresponding prices by going to their web page: DCAM. Scroll down and click on Existencias de Armas.

How many guns can I own and what types?

Note: There are some additional allowances for farm workers and residents of communal properties located outside of urban areas. They may also possess and carry a .22 caliber rifle or a shotgun of any caliber.

Note: The list of caliber restrictions is not a complete list. Refer to the federal law for additional restrictions and exceptions.

The law permits a collector or museum to possess firearms otherwise prohibited by law.

Do I need a permit to carry the gun in my car or on my person?

The only place you are permitted to have your gun — unless you get an additional permit — is at your primary residence.

You even need a permit to transport a gun for the purpose of hunting or target practice.

What are the requirements to get a permit?

If you want to be able to transport your firearm with you on a regular basis for self defense purposes, you will need a permit. There are numerous requirements, including:

These permits are quite rare in Mexico. There are over 128 million people in Mexico, but la Sedena has only issued around 3,000 permits for private individuals to carry firearms.

That number does include those who carry firearms as part of their employment, such as police and private security officers.

Can I permanently import my firearms from the U.S.?

Although there is a procedure to import firearms that comply with the limitations shown in the previous sections in terms of quantity and calibers, in reality it can be a difficult thing to accomplish. One of my followers has been attempting to get it done for some time now without much success.

You can review the requirements HERE.

This post ran a little long for my liking, but hopefully it will clear up some common misconceptions that many people have about gun laws in Mexico.